I am pretty lucky that my Masters program includes field trips, and specailtiy access to different historic locations and musuems. Two weeks ago one of the trips was to Stirling Castle in Stirling. Stirling is only a half hour train ride away from Glasgow, followed by a fifteen minute walk up to the castle. The public transportation system in the U.K. is so fantastic, it really is so easy and stress free to travel aroun the country.

Hoping off the train we needed to make the hike up to the castle, Stirling reminded me of a mini Ediburgh, very similar buildings and a steep walk to the top, where the castle sits looking out over the town and surrounding areas.

The Castle itself was lived in until the late 17th Century, until it was turned over to the British Army in the 18th Century to be used as a military base.  The Great Hall was turned into a barracks for the men to live in, and the sculptures on the side of the castle were turned into shooting targets.

In 2011 a project was completed, that restored the castle to represent what it might had looked like in the past. The team who worked on the restoration project looked through inventories to see what furniture, tapestries, and decorative touches might have existed in the castle to try and make the visitors experience in the castle authentic. As we went through the castle we learned all about the choices the team who worked on the restoration project made to furnish and design the rooms in the castle. The castle is set up as it would have been in the 16th century while Mary of Guise was Regent of Scotland. Throughout the site there are costume interpreters in historic dress to give a more complete experience to visitors. Lucky enough for me, one of my professors was a member of the team that restored the castle so my classmates and I were given the VIP expereince of the castle. Regular tourists kept coming and eavesdropping on what my professor had to say.

The Stirling Heads were a really neat artifact to learn about. The Stirling Heads are these wooden carvings that were located on the ceiling in the castle. The carvings are carved on a round piece of oak, each one representing a different person. The mystery behind the Stirling Heads, is who is represented in each one. The cravings show Roman Emperors, Greek Heroes, members of the English and Scottish Court, plus so many unidentified faces. They remade all of the Stirling heads and painted them to go on display in the castle.

Stirling Castle owns almost all of the original heads, a few are kept in other museums, and a few have disappeared. 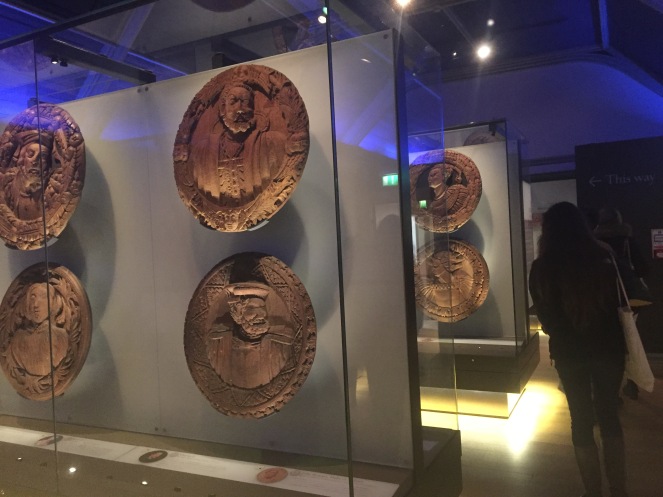 Following the lecture we were able to explore the castle on our own, checking out the Great Hall, the kitchens, chapel, gardens, textile exhibit, and the kids area. I think a few of us were quite excited about the children’s area where we got to play games about clothing, dyes, and different fibres. We also made an attempt to try on the costume gowns that they had for children to try on. It was discovered that if you hold the dress at the zipper from behind with one hand it looks like the dress actually fits you!

Behind the main part of the castle there is a path that you can walk takes you around the castle walls. It was pretty windy up there and at some points I felt like I was going to be blow away, but luckily only my map blew away!

I highly recommend visiting Stirling if you ever have the chance. It is really different to experience a castle when it is furnished as it would have been while it was in use!

One thought on “Travel: Stirling Castle”