The second day that I was in Paris, after going for a delicious brunch, Erika and I made a voyage out to Chateau Fontainebleau, just over an hour outside of Paris in Fontainebleau, France. The Restaurant we went to for brunch is known for having the best cold brew coffee in the city, and with the heatwave that was passing through Paris, we knew the cold brew would be necessary, and it was incredible!!

Initially, it was a bit of a struggle trying to find the correct train (the ticket machines kept telling us there was no train there that day when on the screen it was telling us the train was leaving just in minutes). We decided to run to the train anyways without tickets, and asked the train employees if this train was going where we wanted to go, and if we could buy tickets on board the train, the answer to the both of those questions was yes (yet they never came to ask for tickets, so we had a free ride out), and then we relaxed on the trip out. It was 28 degrees that day, and it was absolutely beautiful out, and this little town and chateau we ended up at was so lush.

For my master’s thesis, I needed to go to Chateau Fontainebleau to look at a particular gallery, in the Chateau. Part of my thesis has to do with Francis 1st (Francois 1er) of France, and Chateau Fontainebleau was one of his main palaces. The chateau is not as elaborate as Versailles, but it was still a really extravagant chateau, with beautiful gardens, architecture and design. Plus Chateau Fontainebleau is a few hundred years older than Versailles! The Chateau dates all the way back to 1137. 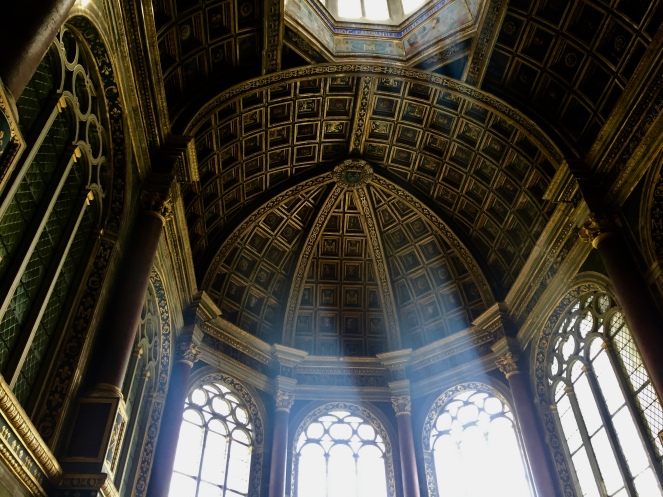 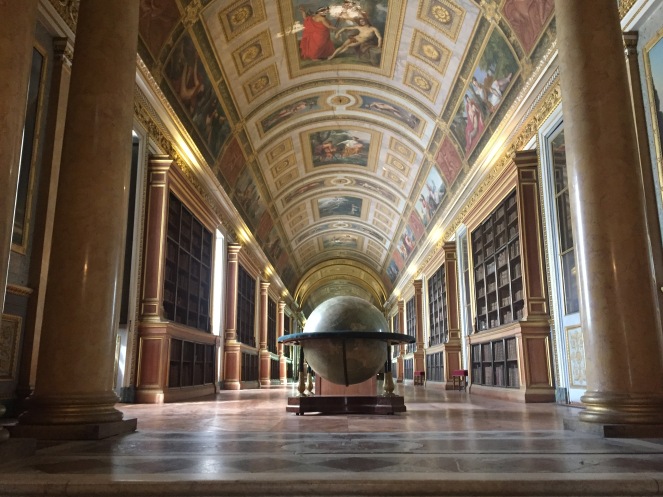 Francis I took a liking to the palace and spent a significant amount of time and effort here. He began constructing his Gallery in 1528, when he brought in the Italian architect Sebastiano Serlio and Rosso Fiorentino to decorate his new gallery. It was here that the Renaissance was introduced to France. His son Henry II who was married to Catherine de Medici (any Reign fans) they lived here and most of their children were born in this palace, including Francis II (the brief husband of Mary Queen of Scots). 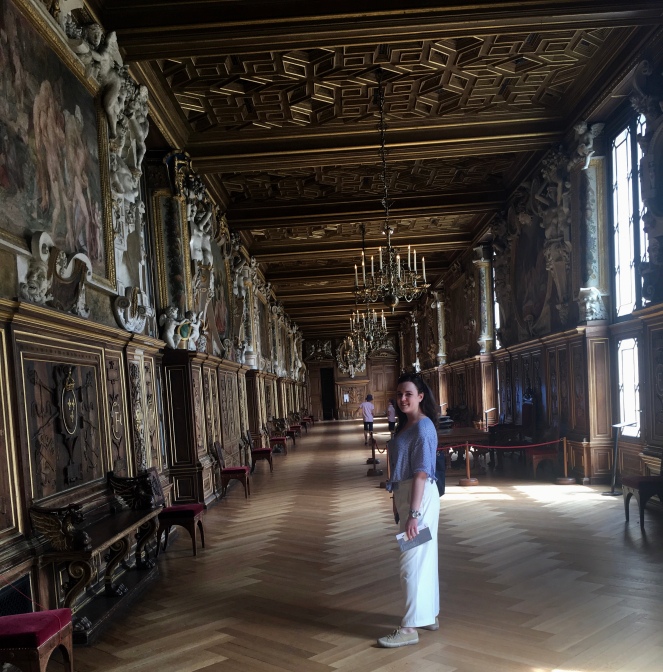 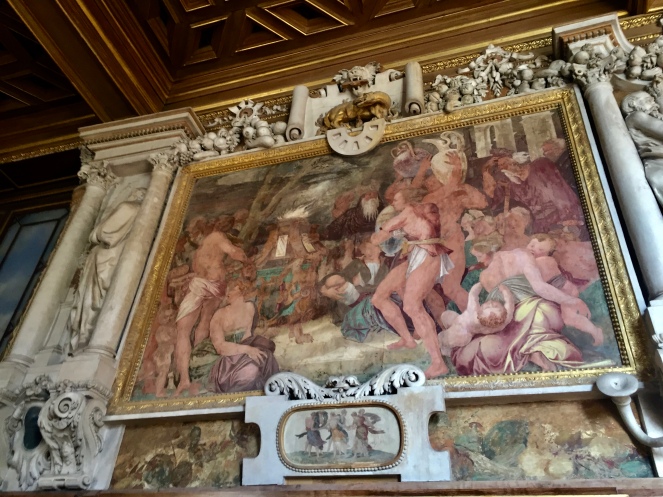 Inside the Chateau there was a Napoleon exhibition on, then the remainder of the different chambers, for the different monarchs who have lived there over the years. There was a bedroom for Marie-Antoinette that had been designed right before the French Revolution, but unfortunately, she never ended up using it…. 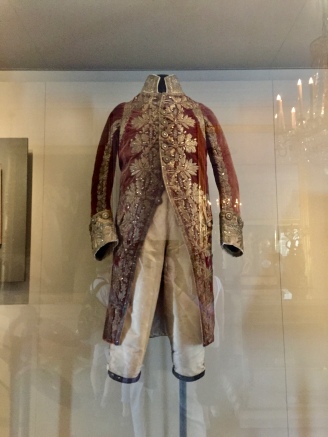 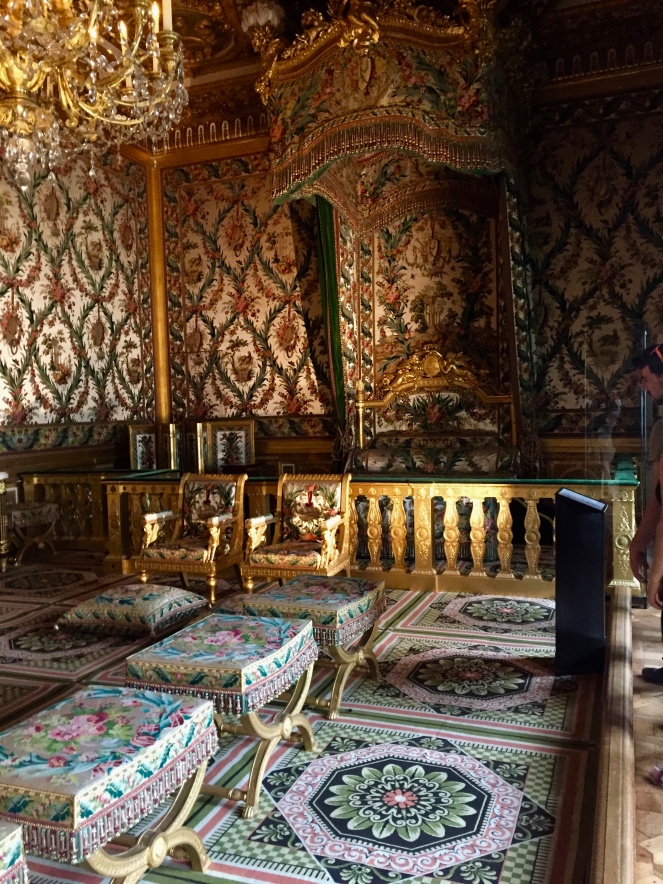 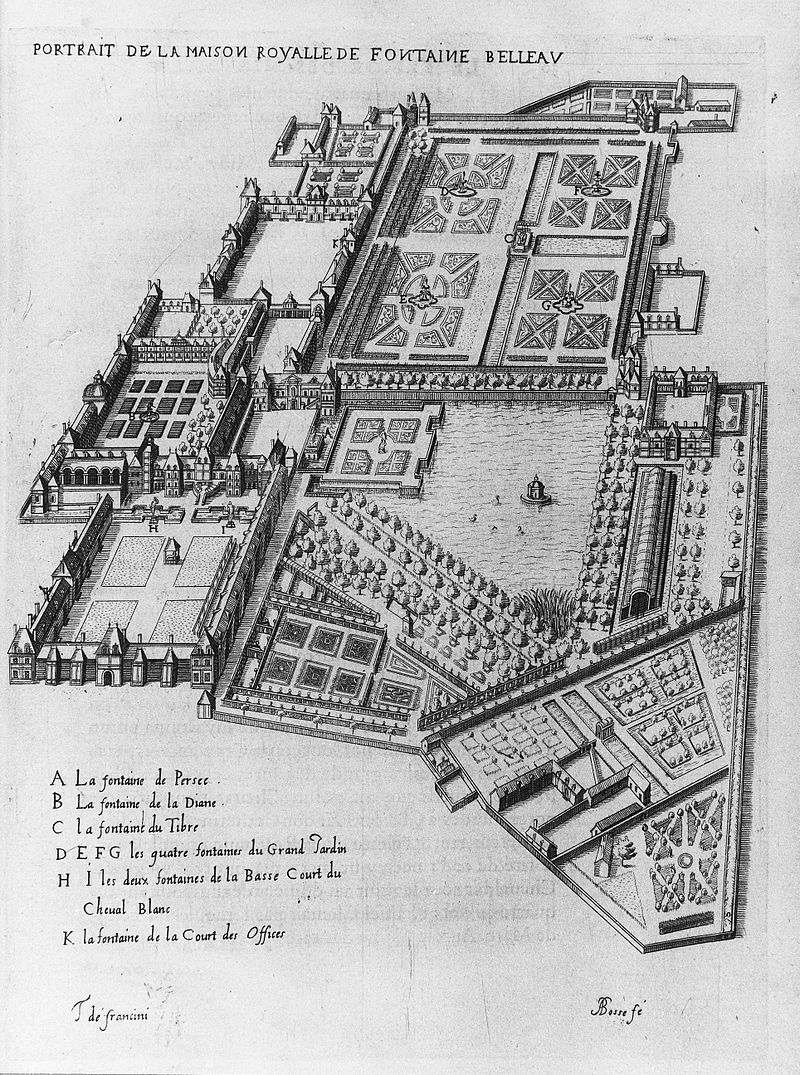 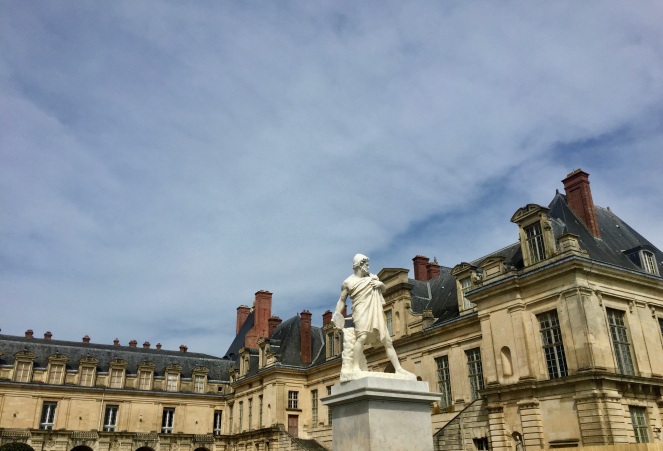 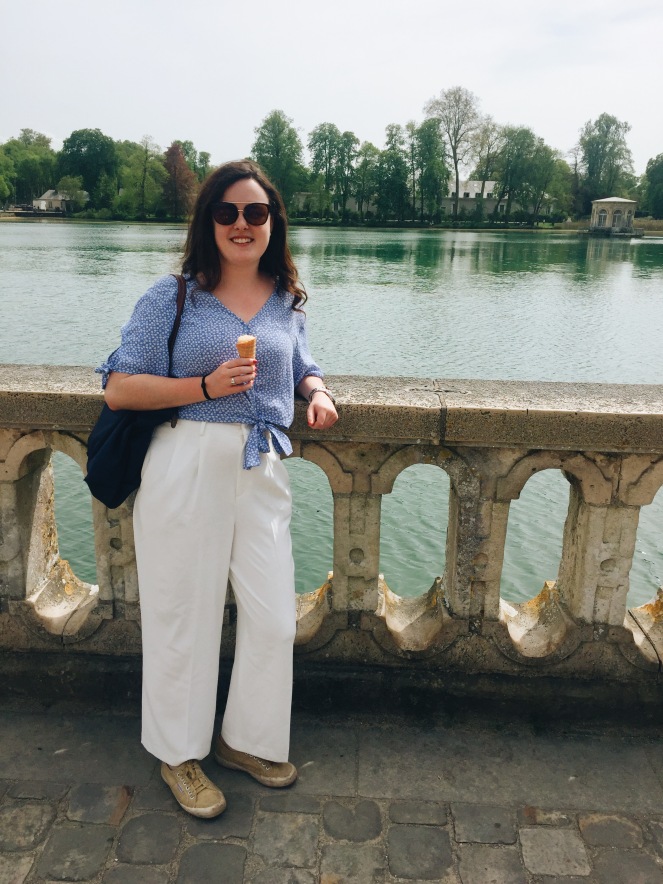 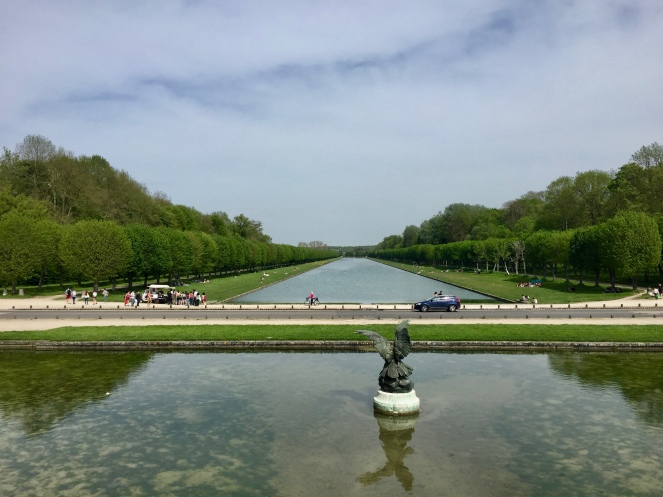 It was so warm out, that we decided we needed to grab a drink before heading back into Paris, so we went for a glass of wine on a patio just outside the chateau. So many people were out just enjoying the beautiful weather and soaking up the sunrays. We decided then to walk back to the train station, which was about 30 minutes instead of taking the bus back in hopes of stumbling upon some French pastries… primarily we were on the hunt for macaroons (a French must). We walked past a couple of boulangeries until we found the perfect one, where the French woman working was so sweet and recommended her favourite macaroons to us. Her absolute favourite was pistachio, and I must say that was my favourite one too! 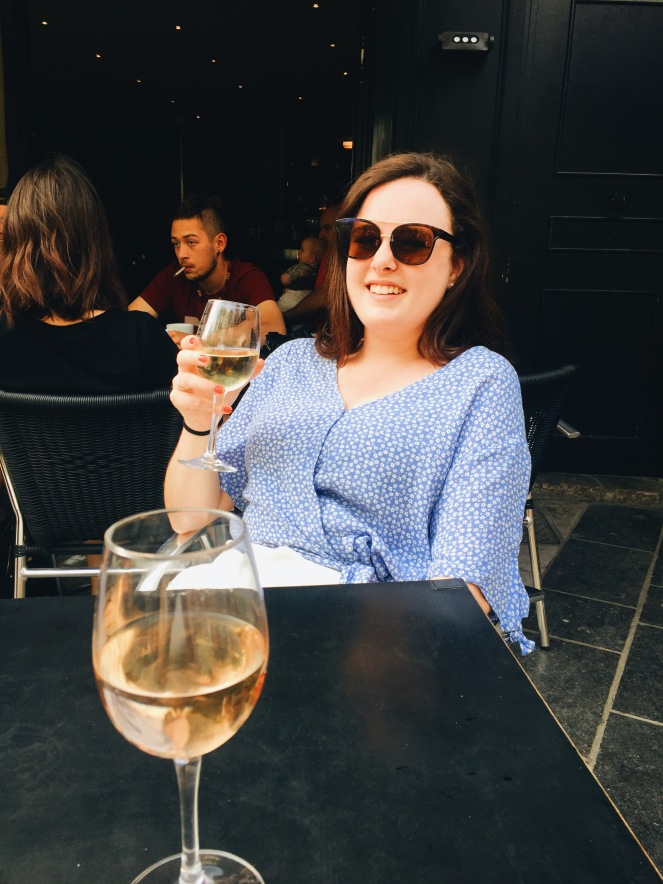 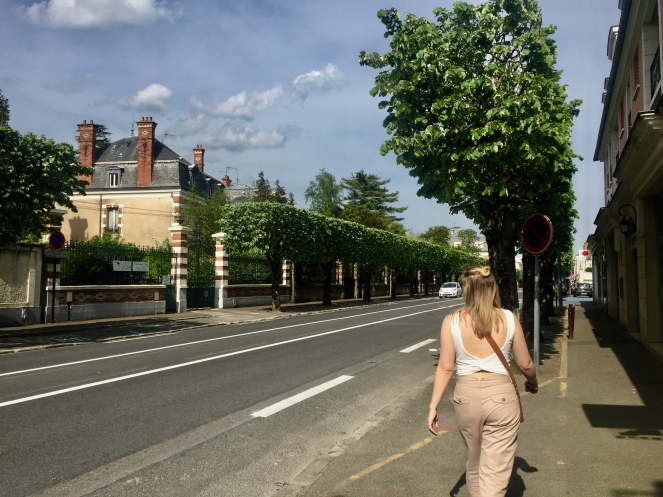 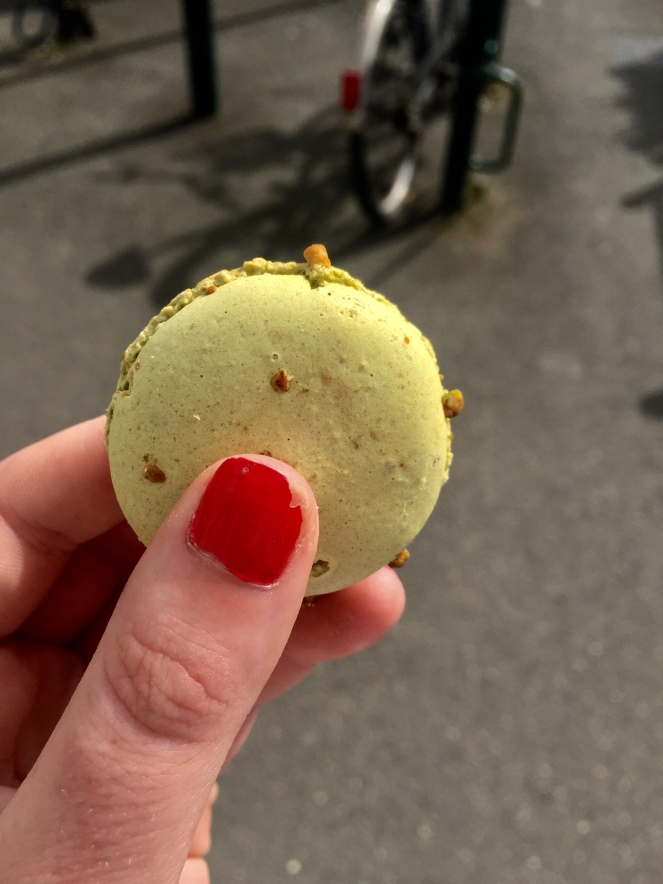 Chateau Fontainebleau is not always on people’s lists for things to do while visiting Paris, but 100% recommend it. It is so nice to take a step out of the city, and see another part of France, especially when it is not super touristy and the chateau is just so beautiful. I hopefully will get to go back at some point in time!!

One thought on “Travel: Chateau Fontainebleau”