A couple of weeks ago (once again while my Swedish friend Axel was visiting) we took a trip to Hopewell Rocks. Embarrassingly, I must admit that I had never been to Hopewell rocks…. or at least when I was old enough to actually remember. What is even worse is that I had spent four summers talking to tourists at the New Brunswick Museum to go and visit Hopewell rocks… having know idea what it was actually like 🙈 HOWEVER, now that I have visited the Hopewell Rocks I definitely will continue to encourage tourists to stop by and check it out. Now, what are the Hopewell Rocks or often referred to as the Flowerpot Rocks? They are bigs rocks that are on the coast of the Bay of Fundy and demonstrate the power of the highest tides in the world!! They are also one of New Brunswick’s Top Tourist destinations.

From where I live outside of Saint John, it is not a far drive. The drive was pretty easy from Rothesay to Hopewell, it took about two hours and we went through Moncton and Riverview first. It was also just after the Thanksgiving weekend and the trees were so beautiful showing off all their fall colours! The one important detail is to know what time low tide is before you go, because you are not allowed to go down after a certain point, because of the tide coming in. We knew that we had to be there by 11:00am in order to be allowed down.

Once entering the park you have a choice of a fifteen minute walk down to the Flowerpot Rocks or to take a shuttle. Even though it was spitting out we opted for the walk down! Since Hopewell Rocks is located on the bay of fundy… visitors are only allowed down on the beach when the tide is at low tide and up to a certain point before it reaches it’s highest tide. Your pass is good for two days, so if you chose you can come back at a later time to see it again at high or low tide! Each day there are four tides, a low tide, a lowest tide, a high tide, and a highest tide. This cycle takes about 12 hours and 14 minutes to go from low to high tide. On this part of the Bay of Fundy the tides changes roughly 50ft during that time. 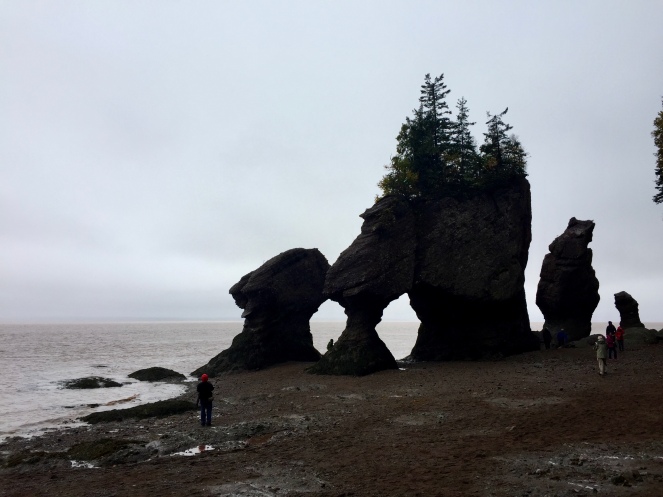 It was spitting out, so I kept alternating between having my umbrella out or not. The issue with having my umbrella was that it was rather windy… and the wind kept trying to blow my umbrella inside out… which of course makes it a useless object and I still end up getting wet! 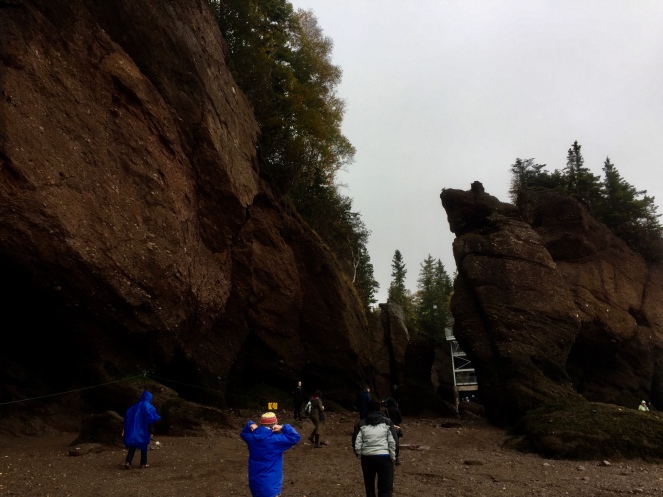 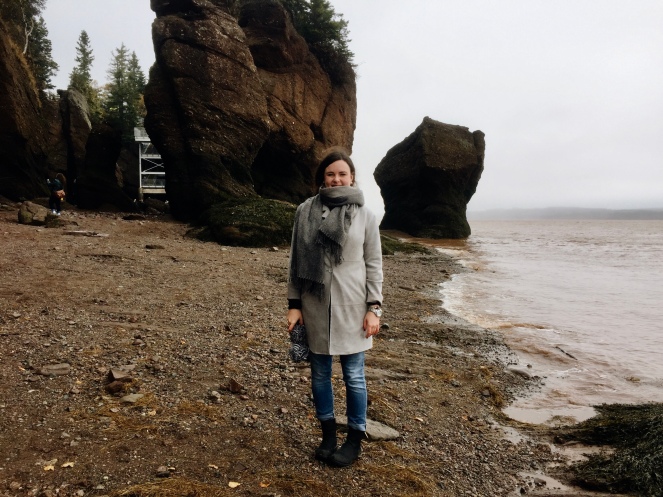 The rocks were formed by tidal erosion, as the water from the Bay of Fundy over time has shaped the stone into their unusual shapes. In geological terms, the rocks are a combination of conglomerate rocks and sandstone.

As New Brunswick’s Slogan is “Be in this place” I definitely think this particular location is worth being in!! Next time you are in Moncton, I recommend taking a couple of hours out of your day to go check out Hopewell Rocks! I would also like to go back another time just to check out the other walking trails that are available on the site.